extract from "The Devil's Snare"

When we journeyed officially outside Saigon, the war came closer. In November [1968], Richard and I travelled to Qui Nhon, a town on the East coast of the peninsula, to attend the official opening of the Canadian Rehabilitation Centre, a hospital built with Canadian funds and staffed by Canadian doctors and nurses. Most of the people treated at this hospital were Vietnamese peasants who had lost an arm or a leg and had come to be fitted for a prosthetic device. Many were children. The doctor told us that some of these patients were casualties of the fighting, but many others had lost limbs while attempting to cook with aviation fuel. At night, they tapped the gas lines at American air bases to obtain fuel for cooking. When they lit the flame in their cookers, the high-octane aviation fuel would blow up, injuring whoever was nearby. The Canadian doctors and nurses were training Vietnamese personnel to design and fit artificial arms and legs so that Vietnamese technicians would be able to continue to treat patients after the Canadians returned home…An honour guard awaited our arrival. The people of the village, dressed in black pants, white shirts and different styles of straw hats, were lined up all along the road leading into town. They waved flags and shouted the Vietnamese equivalent of “three cheers”. There must have been 300-400 villagers accompanying us to the front door of the Centre. Our Vietnamese military escort told us that these villagers were the backbone of village resistance to the Vietcong. I cut the ribbon and Richard made a speech, pledging eternal Vietnamese-Canadian friendship. Then we toured the facility and saw men, women and children who were missing some or all of their limbs. It was heartbreaking to see so many people senselessly maimed, especially the children walking with crutches or sitting on the floor with no legs at all…One little girl of nine or ten, missing one leg and waiting her turn to be fitted, smiled shyly at me as I passed. 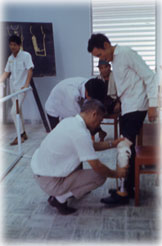